one or two wonderful days into the Middelages,

Claude and Dominique, your guides with experience

and knowledge, invite you to discover Bruges.

Here is a possible program:

and the Battle of the Golden Spurs

* visits of gardens and beautiful sites, other museums. 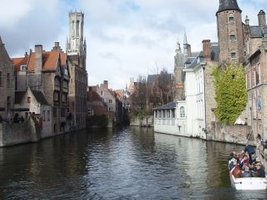 Centre of activity in Bruges, Markt is lined with former corporation buildings decorated with long gables, and the covered market, dominated by a high belfry. To the east of the square, you will see two lovely neo-Gothic buildings. The first is the post office, and the other is a local government building. Until the 18C, a canal led right up to the Grand-Place, and boats would moor here.

The Belfry is the largest in Belgium and a symbol of the city of Bruges. It can be seen from miles around next to the other steeples in the city. Its massive tower dates back to the 13C. The corner towers were added in the 14C and the last octagonal floor, with its fine stonework, was added in the late 15C. The covered market dates back to the Middle Ages and surrounds a pretty courtyard.

Jan Breydel (born in Bruges in the 13th century) is credited with leading the Bruges Matins (Brugse Metten), a violent uprising against Philip the Fair.

Breydel, who was by trade a butcher, led the Bruges Matins together with Pieter de Coninck, a weaver, in May 1302. About three weeks before, on 1 May that year, they had partaken in an attack on the castle of Male and the complete annihilation of the French garrison there. The city archives of Bruges show that Jan Breydel was present from 8 July until 10 July 1302, in Kortrijk, as a supplier of meat for the troops. On the basis of this record, it is generally accepted that he had fought on 11 July 1302 in the Battle of the Golden Spurs.

The Battle of the Golden Spurs (Dutch: Guldensporenslag, French: Bataille des éperons d'or), known also as the Battle of Courtrai was fought on July 11, 1302, near Kortrijk (Courtrai) in Flanders. The date of the battle is the official holiday of the Flemish community in Belgium.

This square is in the heart of Bruges. Four major monuments surround it - the basilica of the Holy Blood, the Gothic Town Hall, the Renaissance Clerk's Office and the former Law Courts. Burg is named after the castle built in the same place by Baudoin Bras-de-Fer. The remains of the castle walls have been uncovered.

This building was erected in the late 14C in the flamboyant Gothic style, and restored in the 19C. The façade has three towers and very detailed decoration. On the first floor, the Gothic room is covered with a vault of panelled diagonal ribs wth some lovely hanging keys. The murals are in the neo-Gothic style and date back to the late 19C. They show certain historical scenes.

In the Middle Ages, the city and its region were managed by the Bruges Frank, a sort of local council, and this was its Palace, rebuilt in the 18C in the neo-Classical style on the site of a former palace (1520), which was itself built in the place of an older building (the Burg), part of which can be seen along the canal. In the 16C alderman's chamber of the Museum of the Bruges Frank, you can see a magnificent chimney.

(8) Our Lady Church with Michelangelo statue

This Gothic church mainly dates back to the 13C. Its brick steeple can be seen from miles around (the construction is 122m high). The interior contains several masterpieces, including a Madonna and Child white marble statue by Michelangelo. The choir contains the tomb of Marie de Bourgogne. A carved wooden gallery links the church to the Gruuthuse Museum. 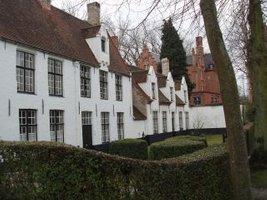 In the choir space behind the high altar are the tombs of Charles the Bold, last ValoisDuke of Burgundy, and his daughter, the duchess Mary of Burgundy. The gilded bronze effigies of both father and daughter repose at full length on polished slabs of black stone. Both are crowned, and Charles is represented in full armor and wearing the decoration of the Order of the Golden Fleece.

The altarpiece of the large chapel in the southern aisle enshrines the most celebrated art treasure of the church—a white marble sculpture of the Madonna and Child created by Michelangelo around 1504. Probably meant originally for Siena Cathedral, it was purchased in Italy by two Brugean merchants, the brothers Jan and Alexander Mouscron, and in 1514 donated to its present home. The sculpture was twice recovered after being looted by foreign occupiers—French revolutionaries circa 1794 and Nazi Germans in 1944.

This great brick vessel stands on a shaded square. Its construction lasted several centuries. The tower was first, then the church in the Gothic style. Unfortunately, several fires damaged the building, and it was only completed in the 16C, with the addition of the chapels and choir. The tower was finished in the 19C in the Romanesque style. 99 metres high, this typical "mast" is one of the symbols of Bruges. The inside of this vast cathedral is finely decorated by wooden altars and splendid tapestries with Bible stories.

This 15C church contains Gothic and Oriental elements. It is probaby inspired from the Church of the Holy Sephulcre in Jerusalem. The stained-glass windows, which date back to the 16C, represent members of the Adornes family, a business dynasty from Genoa who commissioned this church. In the centre of the nave, you will see te lovely reclining statue of Anselme Adornes and his wife (15C). The crypt houses a reconstruction of the tomb of Christ.

This church was built in the 17C in the Gothic style, that had been all but overtaken by the Classical or Baroque. It was lavishly furnished, with a rood screen, panelling, confessionals and a pulpit. The Belgian Flemish poet Guido Gezelle (1830-1899), born in Bruges, was baptised here. 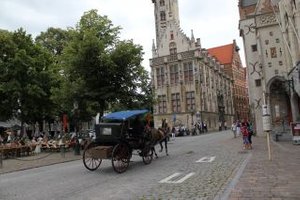 Groeningemuseum houses a wonderful collection of paintings from the 15C to the present day. Its collection of early Flemish painting alone warrants a visit. These masterpieces symbolise the genius of Bruges. On show here are some of the most famous paintings in the wJan Van Eyck kanuniek vanderpaeleorld, by painters such as J Van Eyck, Petrus ChristusH Van der Goes,H Memling and Gérard David.

It houses a comprehensive survey of six centuries of Flemish and Belgian painting, from Jan van Eyck to Marcel Broodthaers. The museum's many highlights include its collection of "Flemish Primitive" art, works by a wide range of Renaissance and Baroquemasters, as well as a selection of paintings from the 18th and 19th century neo-classical and realist periods, milestones of Belgian symbolism and modernism, masterpieces of Flemish expressionism and many items from the city's collection of post-warmodern art.

A splendid and very valuable collection of Flemish masters is the pride of this museum. First of all, there are two works by Jan Van Eyck, the first and most important 'Flemish Primitive'. The museum's masterpiece is 'The Madonna with Canon Joris van der Paele', which Van Eyck painted in 1436. The rich detail of the clothes of the personae on this painting make it one of the true treasures of early Flemish medieval painting. A second work by Van Eyck is the portrait of his wife 'Margareta Van Eyck'.

Other medieval Flemish masters from the 15th century are represented here with some of their masterpieces: 'Death of the Holy Virgin' by Hugo van der Goes, 'The altar of Saint Christopher' by Hans Memling, 'The Justice of King Cambyses' and 'The baptism of Christ' by Gerard David. These are only the highlights of the entire collection which comprises also several anonymous Masters from Bruges.

Hans Memling (1435/40(?) - 1494)  is considered one of the most important 'Flemish primitives', although he was born in the German city of Seligenstadt, near Frankfurt. There are not a lot of precise details known about him and his life. He was most probably influenced by the painting school of Cologne and by the painter Rogier van der Weyden in Brussels. In 1465 Memling is mentioned for the first time in the city books of Bruges. In 1480 he is considered to belong to the group of wealthy inhabitants of the city. He married Anna de Valkenaere and had three children with her. He died in Bruges on August the 11th 1494 and was buried in the local St.Gilles church.

The reason why some of his most beautiful paintings were made for the St. John's Hospital has given rise in the 19th century to a legend about his arrival in Bruges. Hans Memling might have been a soldier in the army of Charles the Bold, duke of Burgundy. When he arrived severely wounded in Bruges he was taken care of by the sisters and brothers of the Hospital. To reward them he made the paintings that are still to be seen in the Memling Museum.

This museum is part of the St.John's Hospital complex. Inside, the old hospital infirmary can be visited as well as the old pharmacy. In the former chapel of the Hospital six paintings by Hans Memling are exposed.

One of the masterpieces is the Shrine of St. Ursula. The wooden shrine, which contains the relics of St. Ursula, looks like the earlier metal shrines that were produced in the preceding centuries. In six bow-arched panels, Memling tells the history of Ursula. The two front panels show St.Ursula accompanied by 10 virgins, each representing 1.000 virgins (see picture below) , and Our Blessed Lady in the presence of two hospital sisters (Jossine van Dudzele and Anna van den Moortele). Memling made the shrine before 1489. It replaced an older shrine which is still in the St. John's Hospital) 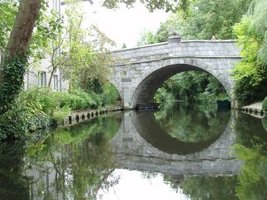 To make known the story of the transformation of cocoa into chocolate and to promote the health and quality aspects of Belgian chocolate.

Choco-Story, the Chocolate Museum is a source of data and historical, geographical and botanical information as well as recipes for

The lace museum overlooked by the Jerusalem Church was already proud to house some real ‘lace ‘pearls. The centre is situated in some renovated almshouses. A place where old and poor lace workers used to live and that not even 50 years ago.

Here you can find a permanent exhibition showing several lace varieties. This exhibition is regularly extended with some temporary exhibitions. Depending on the theme of the exhibition it can show some domestic works or foreign pieces.

The Folklore Museum is housed in eight 17th century almshouses, with a modern extension. Here you can see a classroom, cobblers, milliners, and cooper’s workshops, a tailor’s, a pharmacy, a patisserie, an inn, a Flemish living room, a bedroom, and traditional textiles. Each room contains a wealth of antique objects and authentic decors.

On the top floor, you can enjoy our new lace section.

If you come on the first or third Thursday afternoon of the month, you won’t be disappointed: this is when we make sweets in the traditional way!

A peaceful haven not far from a canal and reached via a lovely classical door, the "Beguine convent of the vine" was founded in 1245 by Marguerite of Constantinople, countess of Flanders. This place of prayer is arranged around a large rectangular green space under the shade of trees that is scattered with daffodils in spring. Beginage includes a 17C church and some white houses that belonged to the Beguines, who have now been replaced by Benedictines.

Between the 15C and 18C, the "God's houses" were a real institution in Bruges and could be found everywhere. They were hostels for the old or poor, financed by corporations. The low brick houses were generally built in rows and whitewashed, and they are modest-looking. Each of their façades has a door and window with a high skylight.

This very pleasant boat trip is a great way to see Bruges from another angle; its charm, quietness and romanticism. It is an ideal complement to a tour of the city on foot. The best is to do at the end of your tour on foot. 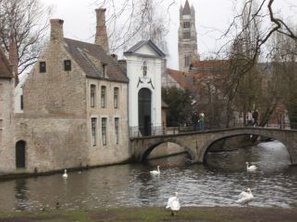 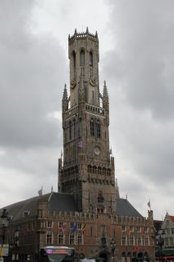 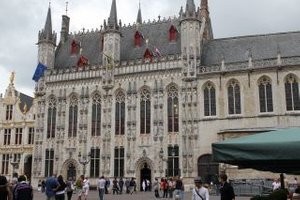 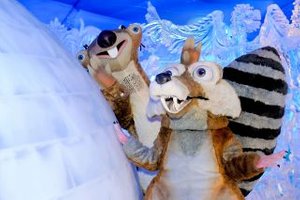 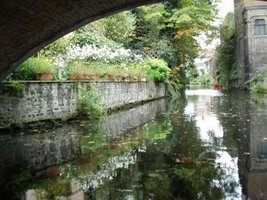