With Dominique or Claude, a guided visit of Ghent.

Ghent is a city located in the Flemish region of Belgium. It lies at the confluence of the rivers Scheldt and Lys which were very important for its economical development in the middle Ages. Today it is a wealthy city of 250.000 inhabitants, with a seaport, a lot of new-technologic companies, a university, and a number of architectural and cultural treasures.

Many historians believe that the older name for Ghent, 'Ganda', is derived from the Celtic word 'ganda' which means confluence.

In the 7th C. Saint-Amand founded two abbeys in Ghent.  It meant the beginning of a constant economical grew.

The city flourished from the 11th century on. Until the 13th century Ghent was the biggest city in Europe after Paris with a population of 65,000 souls. Today, the Belfry and the towers of the Saint Bavo Cathedral and Saint Nicholas' Church are just a few examples of the skyline of this flourished period. Don’t forget the Castle, called “Gravensteen”, amazing building bringing you back in the time of knights and medieval wars.

Both rivers flowed in an area where a lot of land was periodically inundated. The surrounding marshes created by these inundations and the grass all around this water were ideally suited for herding sheep, the wool of which was used for making cloth. In reality, Ghent was, during the medieval period, the most important city for cloth and textile.

Impossible to move aside: Claude and Dominique are able to explain one of the most famous artworks of Medieval Art, and telling among the most wonderful religious paintings in art history: ”The Lamb of God”. Called The Ghent Altarpiece due to its location in the Saint Bavo Cathedral, it was created around the years 1430 by the brothers Hubert and Jan van Eyck, possibly the most excellent Flemish Primitive Painters so far. 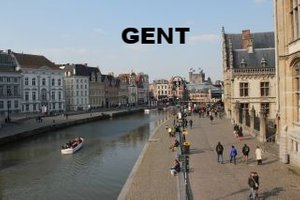